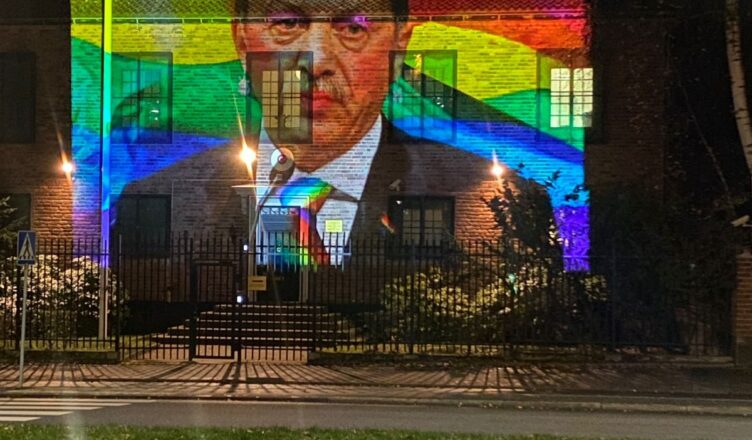 We send our greetings to our dear friends – the revolutionary people of Kurdistan. We stand in
solidarity with your righteous struggle for freedom and democracy. We mourn the innocent lives that
were lost on 20 November 2022 due to Turkish aggression. We salute the immortal martyrs.

On 6 November 2022, the Swedish Minster for Foreign Affairs Tobias Billström gave a statement
claiming that Turkey is a democracy. The statement, which is manifestly untrue, is nothing but a
desperate attempt by the Swedish government to secure its accession into NATO by pleasing the
dictatorship of Turkey. In response to the statement given by the Swedish government and the
continuous Turkish aggressions, the Rojava Committees recently projected several images on the
Turkish embassy in Stockholm, Sweden, to shed a light on the actual state of democracy in Turkey.

In 2015, it was revealed that the Turkish intelligence agency had been directly arming jihadist groups
in Syria. Can Dundar, editor-in-chief of Cumhuriyet newspaper, was arrested and subsequently
sentenced to 27 years in prison for having published the story. Sentencing journalists to prison over
“terror-related” charges is a common occurrence in Turkey. On 25 October 2022, eleven Kurdish
journalists were detained by Turkish authorities on terror-related charges. Turkey is one of the
world’s largest jailer of journalists and currently ranked at place 149 out of over 180 countries,
between Mexico and the DRC. According to Reporters Without Borders, all possible means are used
by Turkish authorities to undermine its critics. Several members of parliament belonging to HDP, as
well as its previous co-chairs Figen Yüksekdağ and Selahattin Demirtaş have been removed from
office and jailed. HDP is currently at risk of permanent closure by Turkish authorities. Gatherings in
support of LGBTQ-rights, such as the annual Pride parade, are banned and its participants are subject
to violent arrests and brutal assaults committed by Turkish authorities. In June 2022, more than 200
demonstrators were violently detained by the Turkish police for having participated in Istanbul Pride.

Turkey is also using all possible means to silence critics and activists living abroad. On 9 January 2013,
Sakine Cansız, Fidan Doğan and Leyla Şaylemez were murdered in cold blood by an agent of the
Turkish secret service. In 2018, it was revealed that Turkish authorities had made plans to assassinate
several individuals in Denmark. In 2020, prominent journalist Abdullah Bozkurt was brutally assaulted
outside of his home in Sweden.

The word ‘democracy’ can never be used to describe a state which commits crimes such as these.
The democratic people of Sweden and Turkey will not be fooled by the lies of the Swedish Minster
for Foreign Affairs.

We will continue to reveal the crimes of the fascist Turkish state, and we urge the democratic public
to act against the deceitful statements of the Swedish government.